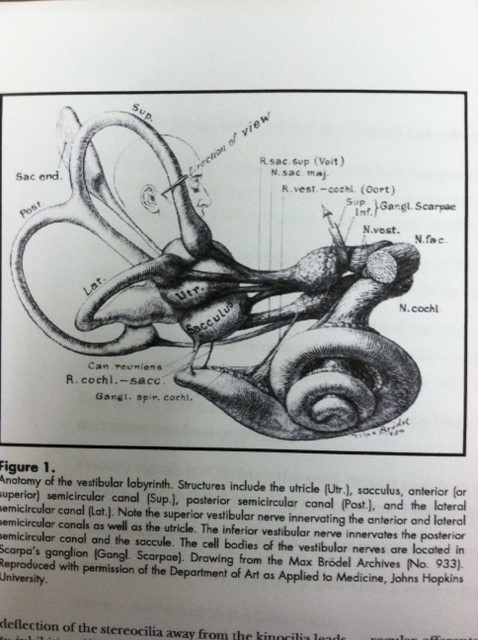 It is all hooked together – Vestibular Ocular Reflex (VOR)

The VOR is a subcortical response with a latency of 16 msec., this is the quickest eye movement reflex that we have. The fear reflex is the only body reflex that is faster.

At birth, the VOR GAIN of 1.0 is all subcortical, yet over time the speed of tracking and the frequency of saccades increases up to age 6 to 12 months. Then, as an adult, the vestibular gain at the subcortical level is only .6 and the remaining .4 is cortically developed in the frontal lobe for a total of 1.0.

DIZZINESS – Light-headedness is often defined as a feeling that fainting is about to occur and can be caused by nonvestibular factors such as hypotension, hypoglycemia, or anxiety. Disequilibrium is defined as the sensation of being off balance. Often, disequilibrium is associated with nonvestibular problems such as decreased somatosensation or weakness in the lower extremities. Vertigo is defined as an illusion of movement. Vertigo tends to be episodic and tends to indicate pathology at one or more places along the vestibular pathways. Oscillopsia is the experience that objects in the visual surround that are known to be stationary are in motion. Oscillopsia can occur in association with head movements in patients with vestibular hypofunction because the vestibular system is not generating an adequate compensatory eye velocity during a head rotation. A deficit such as this in the VOR results in motion of images on the retina and in a decline of visual acuity.

A conclusion (Schubert & Minor, Physical Therapy, Vol. 84, No. 4) is “when receptors in the inner ear and central pathways are functionally normal, the vestibular system provides exquisitely accurate mechanisms for stabilizing gaze and posture”.

Accuracy and speed yes, but where does the directional signal come from? Velocity signals (rVOR) from the semi-circular canals or acceleration signals (tVOR) from the otoliths, need a signal encoding EYE POSITION. Feldenstruktur fibers role?

Visual Diagnosis and Care of the patient with Special Needs – Taub, Bartuccio, & Maino …More recently, muscle fibers in EOM’s (Extra Ocular Muscles) have been identified that demonstrate a 1:1 relationship between nerve and muscle fiber. These Feldenstruktur Fibers may provide eye muscle positional and directional information, including feedback to and from the vestibular system to maintain alignment. In patients who have had EOM surgery, some of these fibers have been severed, which may result in the loss and/or diminution of proprioceptive feedback via these fibers. This may be an additional impediment to visual performance, as proprioceptive feedback mechanisms that normally support visual function have been compromised.

It has been found that 20% of all motor neuron connections in the EOM’s are Feldenstruktur Fibers – this is a proprioceptive feedback loop for position of the eye(s). These fibers are not fully developed until 6 to 8 years of age.

Eye muscle surgery has never been proved that it gives the patient full functioning binocular vision as a result of the surgery (and it never will). The advancement of scientific research is agreeing with this statement.